I began my day by picking up my friend Laura’s bike.

It sat locked on the street overnight. In front of Bloomingdales.

Laura is a former co-worker/current friend. She lives in Santa Monica. And let me borrow her bike. 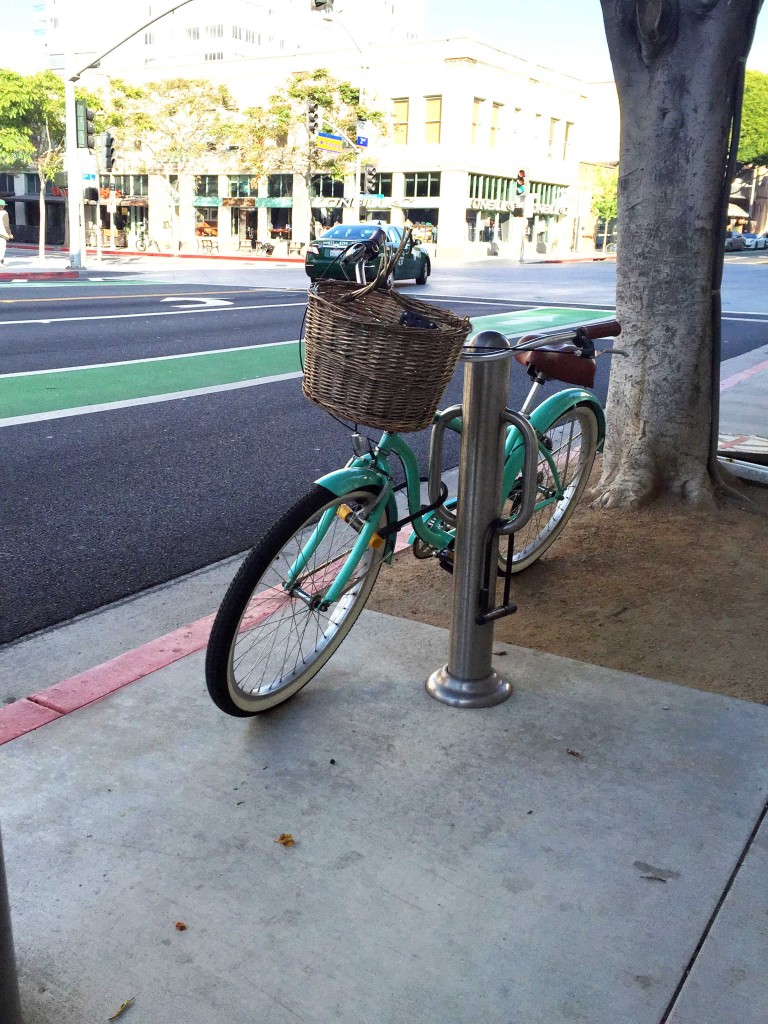 I rode the bike to Huckleberry a delicious cafe and bakery.

I locked up the bike on the street corner.

I sat outside and ate poached eggs with market vegetables.

I did not eat the tomatoes because tomatoes are gross. 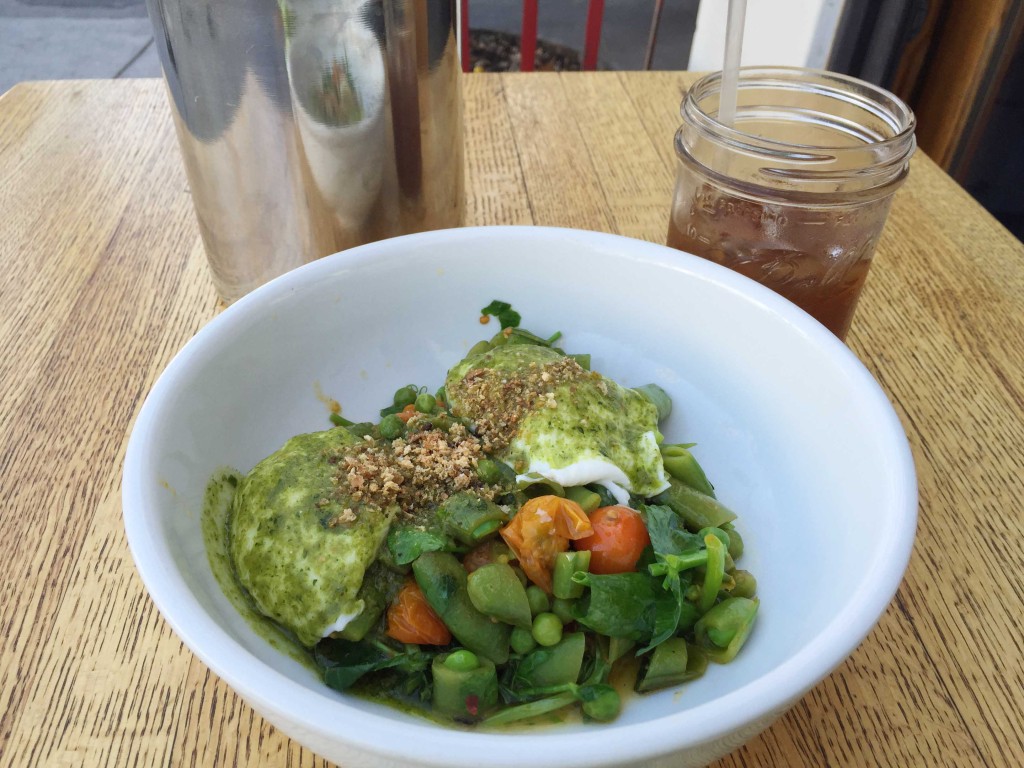 After breakfast, I walked back to the bike.

That’s when I noticed 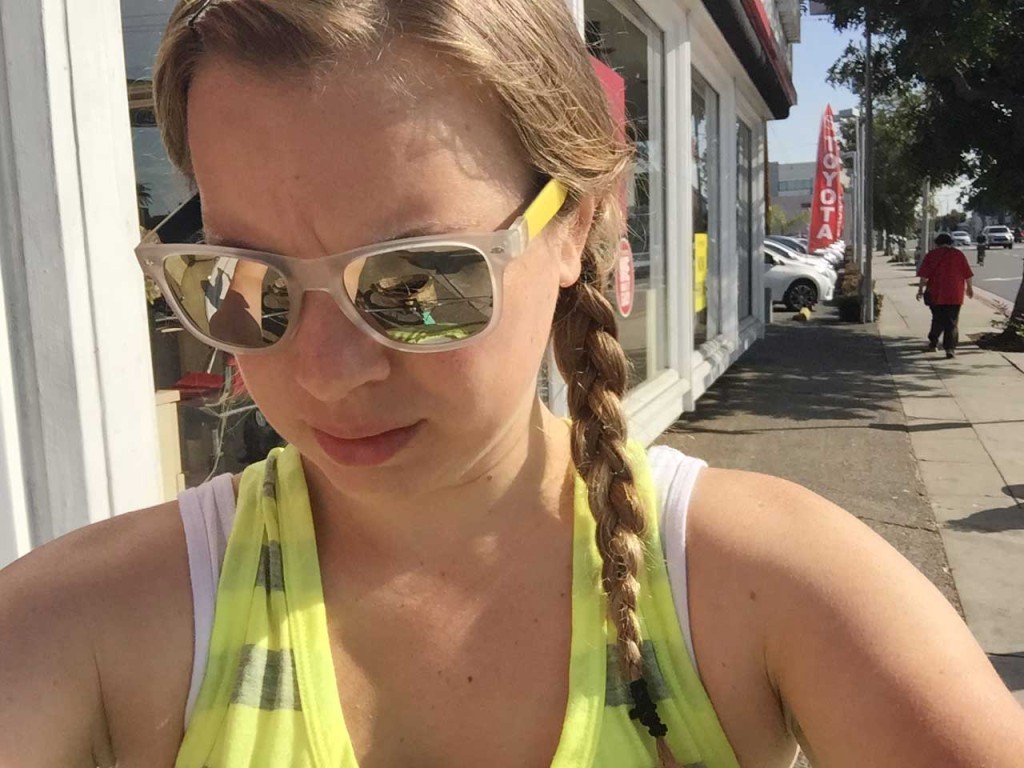 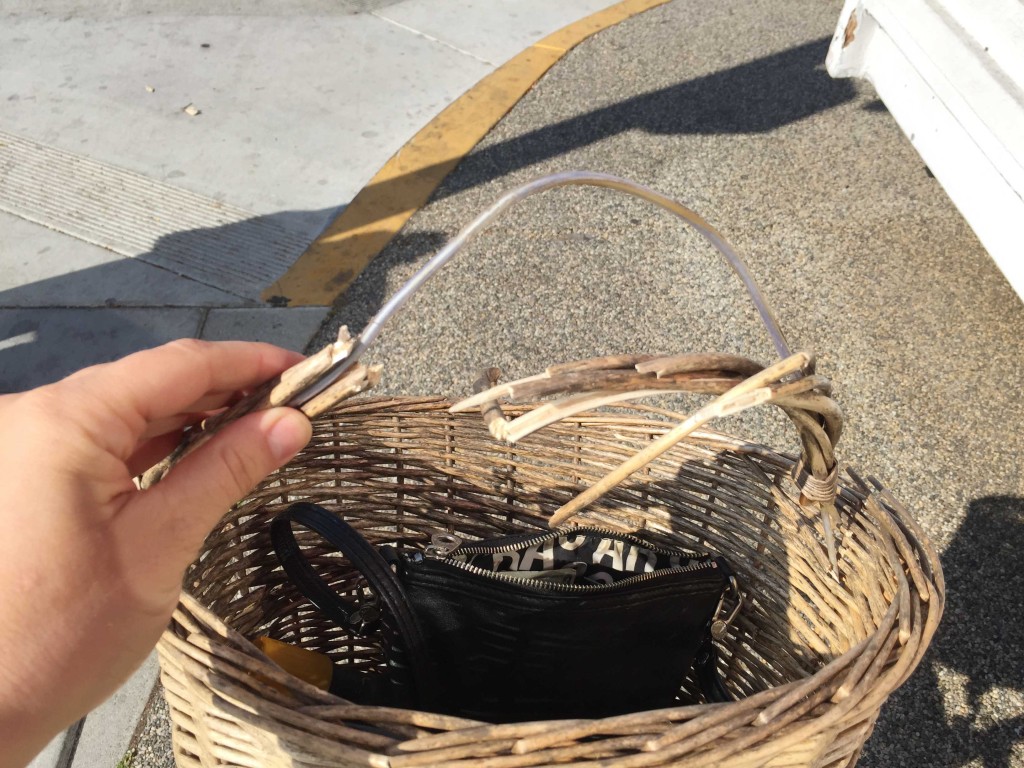 The bike’s basket handle was broken.

Was the basket’s handle supposed to look like that?

Was it like this yesterday and I didn’t notice?

Should I cut the basket handle off and hope that Laura won’t know the difference?

I pushed the handle down to make it look better. 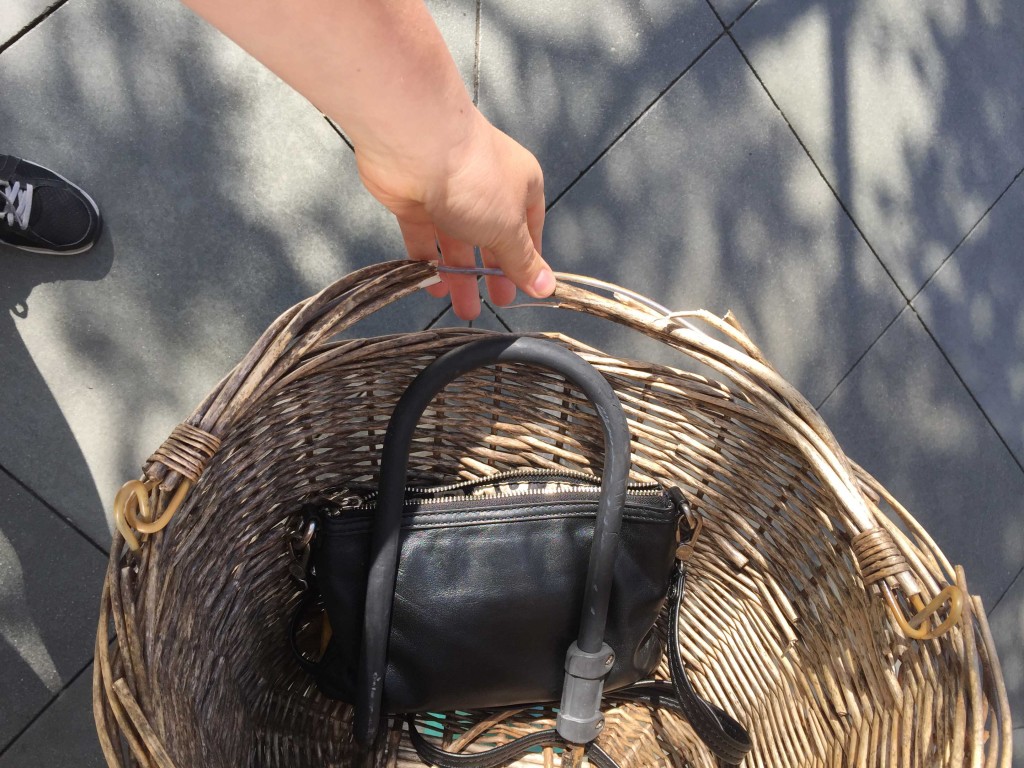 I rode my bike to Equinox gym where Laura was working out.

I was meeting her to get her apartment key.

I was going to make a copy of the key while she was in exercise class.

Because I am going to stay at her apartment.

Laura walked up to the bike.

She looked at the basket’s handle.

“A giant bird,” I shouted, trying to distract her, “Wearing a Laker’s uniform! It must be ten feet tall!”

She didn’t fall for the distraction. 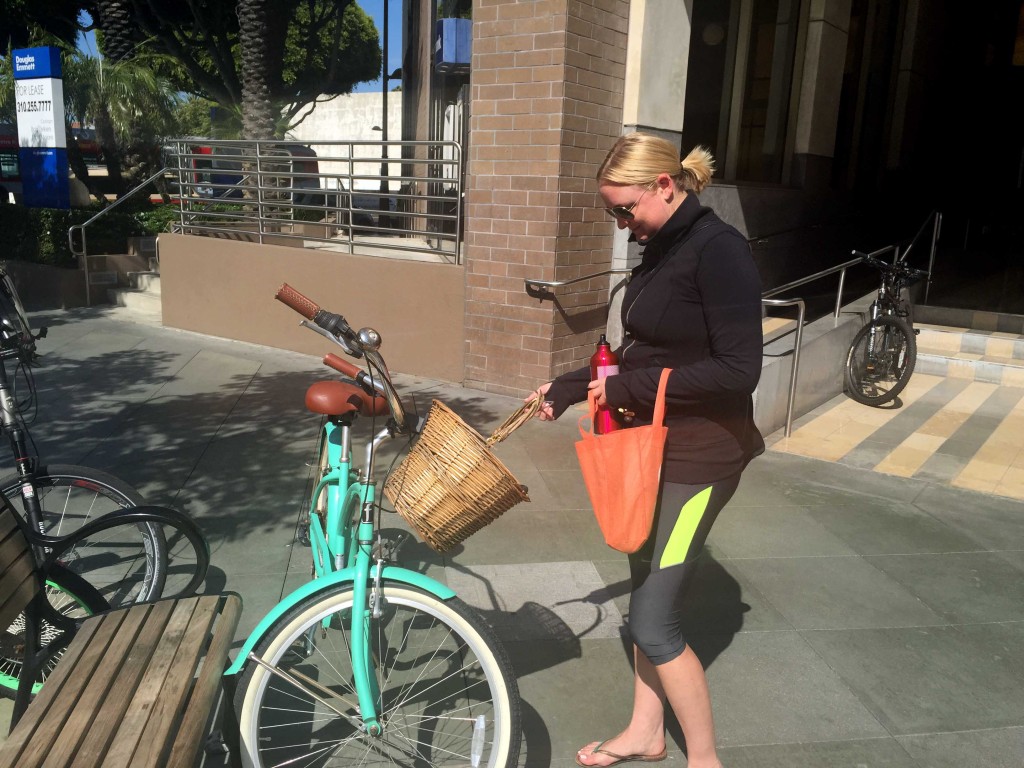 “Someone must have damaged the bike in the nighttime,” I explained to her.

“Don’t worry Becky. It’s all good,” Laura said to me and gave me a thumbs up.

My worries were relieved.

I left laura and headed to the Locksmiths. I looked up a locksmith using Google Maps.

I rode my bike for one mile.

I arrived to the locksmith’s address but it was an apartment. Not a store.

I called the locksmith number.

“Well, we are a locksmith who goes to your house if you get locked out. We don’t have a store,” he said.

I biked to Fisher hardware store a mile away. 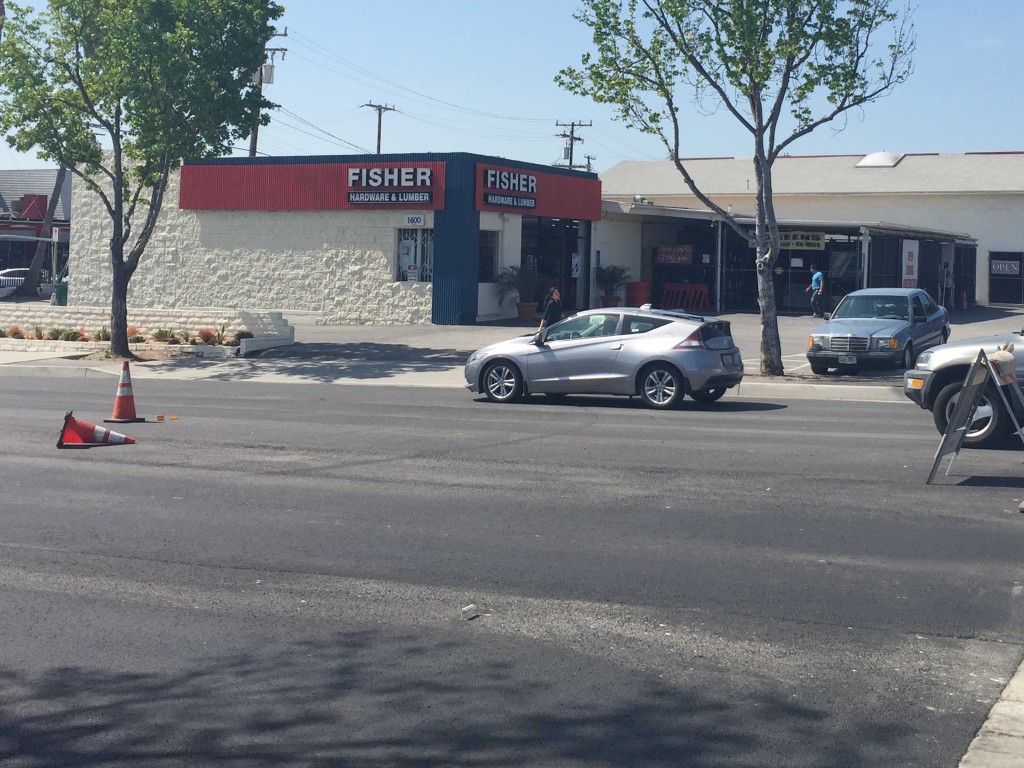 A nice man copied the key.

It took him less than one minute to do. 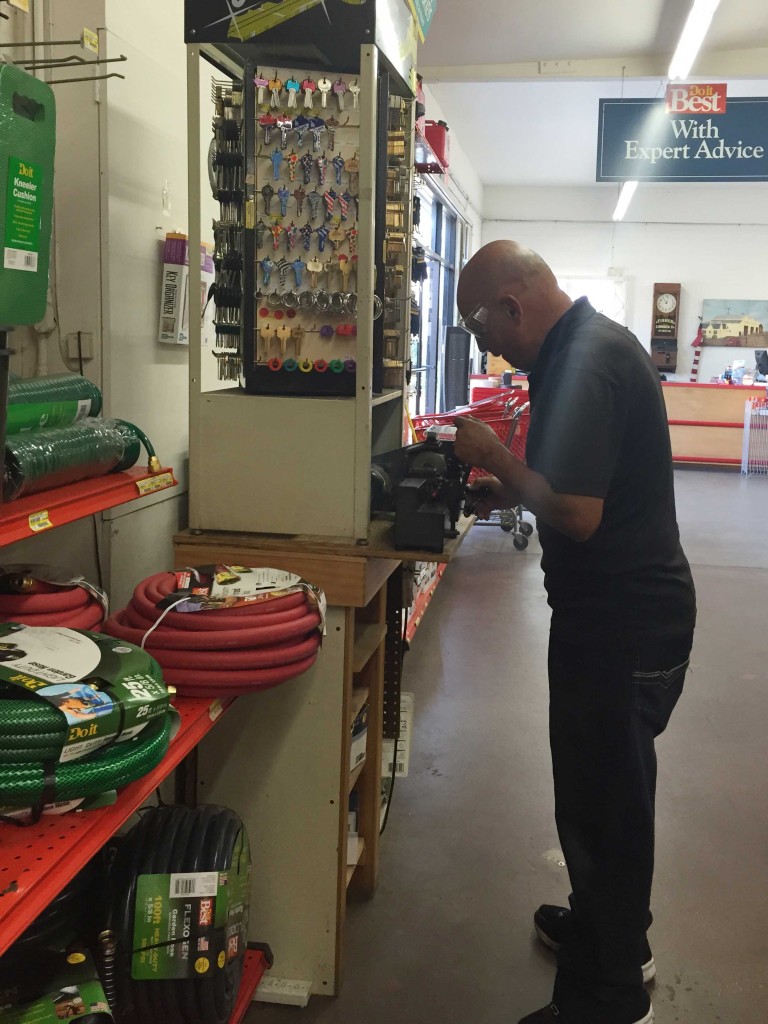 “Can I get another key made?” I asked.

I got two extra keys made. Figured Laura could use an extra one.

I wanted to get twenty more keys made. Because they were cheap. But that would have been unnecessary. 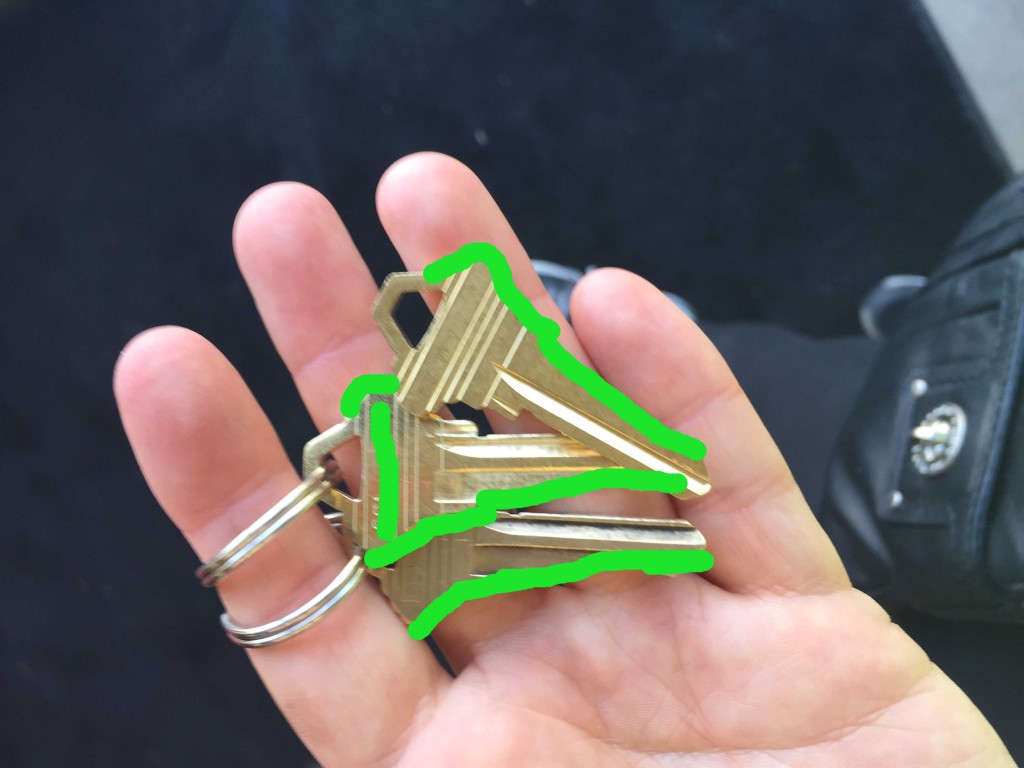 I gave Laura her keys.

I drove in my rental car, 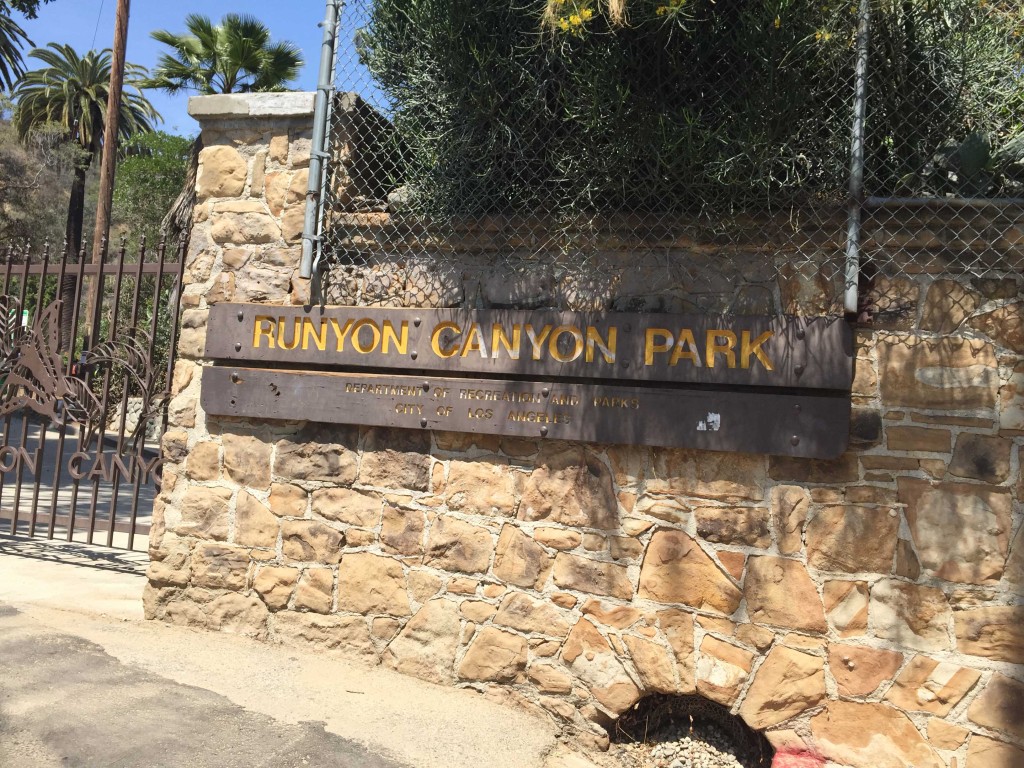 I was excited to do my first California hike.

The hike started off great.

The trail was populated. 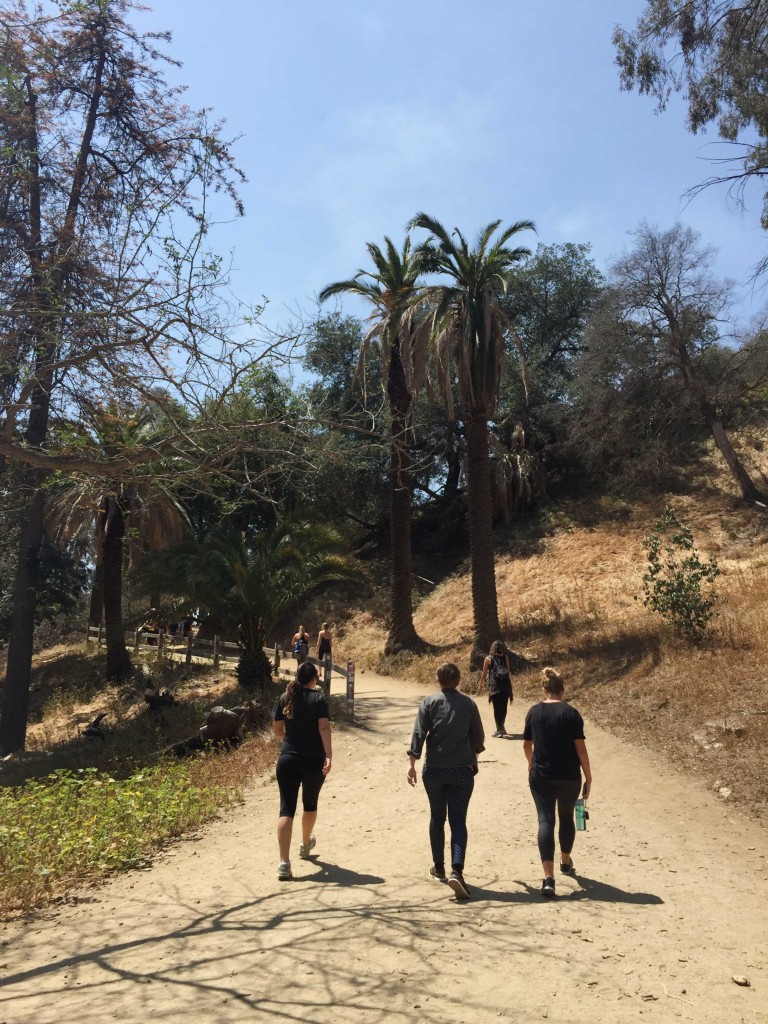 There were two paths.

I picked the one to the left. I had no idea where it led and no idea what the hike was like.

I was excited to see beautiful views.

The trail got steep. 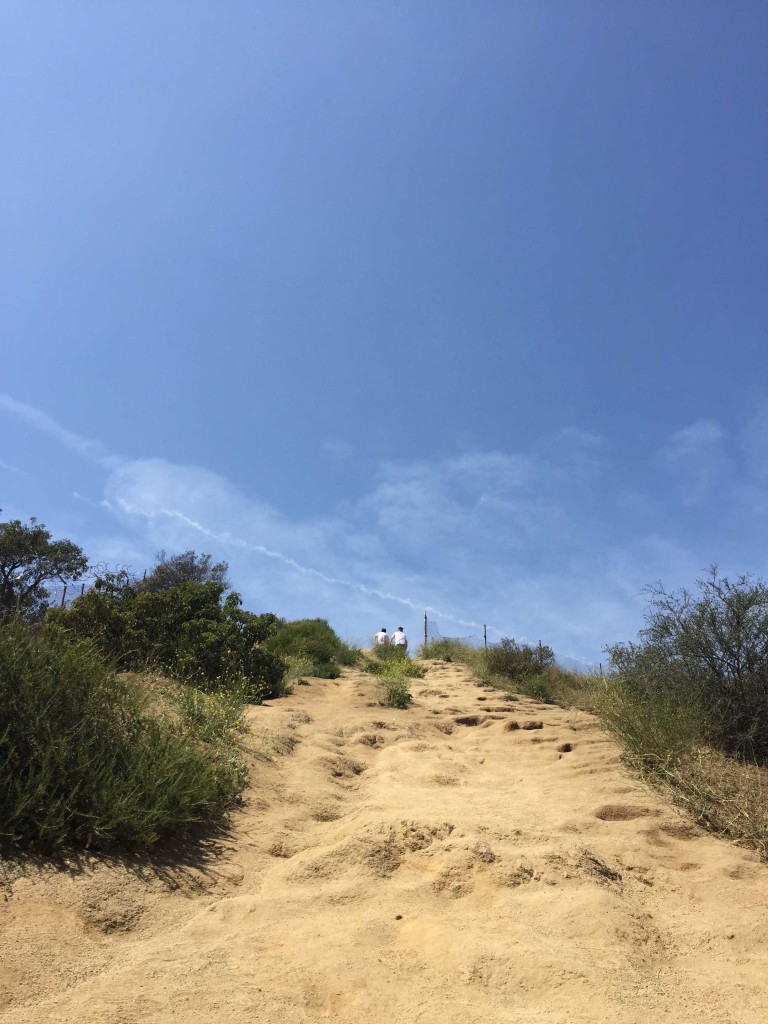 Each time I got to the top of the inclines, my heart pounded quickly.

I paused in the middle of hills to take breaks.

It was difficult for me. I was not familiar with the path.

It felt great to exercise.

I got to the top and saw the HOLLYWOOD sign. 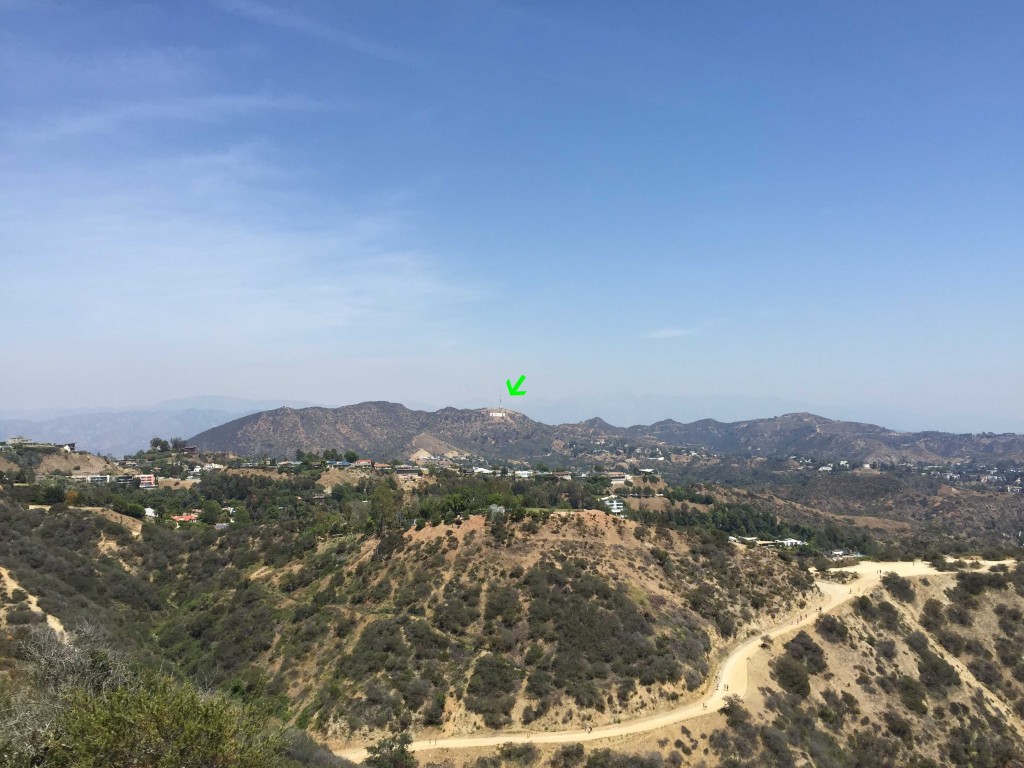 I walked down carefully.

I (purposely) slid on my booty a few times too. 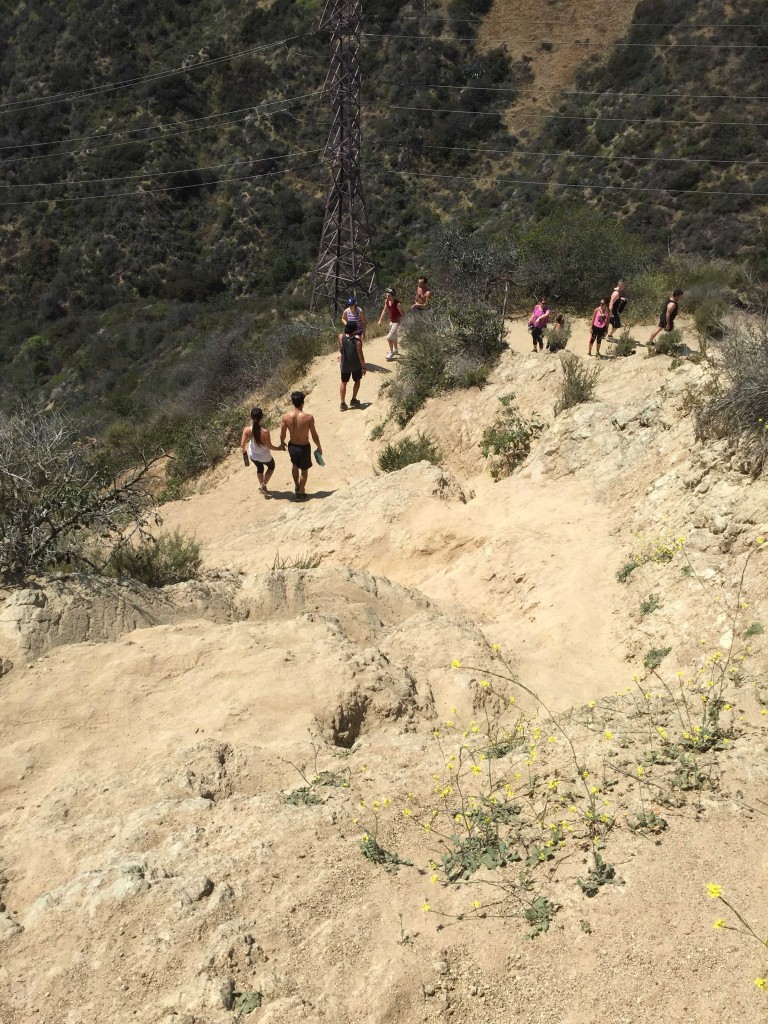 I felt relieved it was downhill the rest of the way.

Until I saw stairs going up. 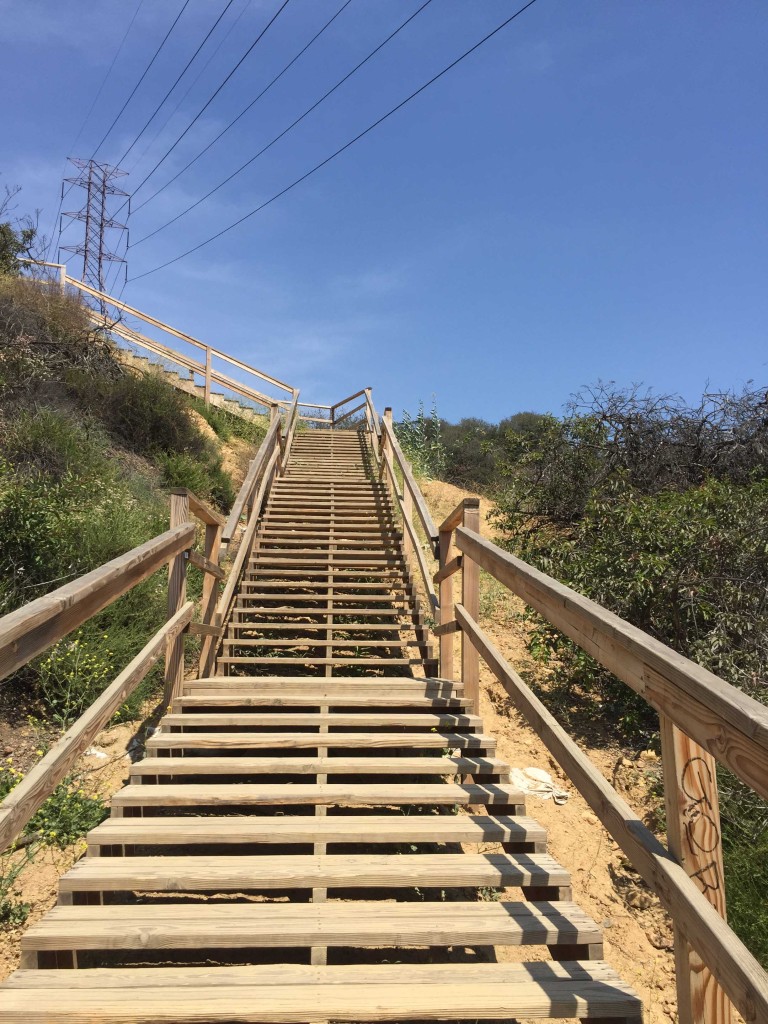 I got to a flat part.

I saw a cute puppy looking at me.

As a man and a woman exchanged a black cap. 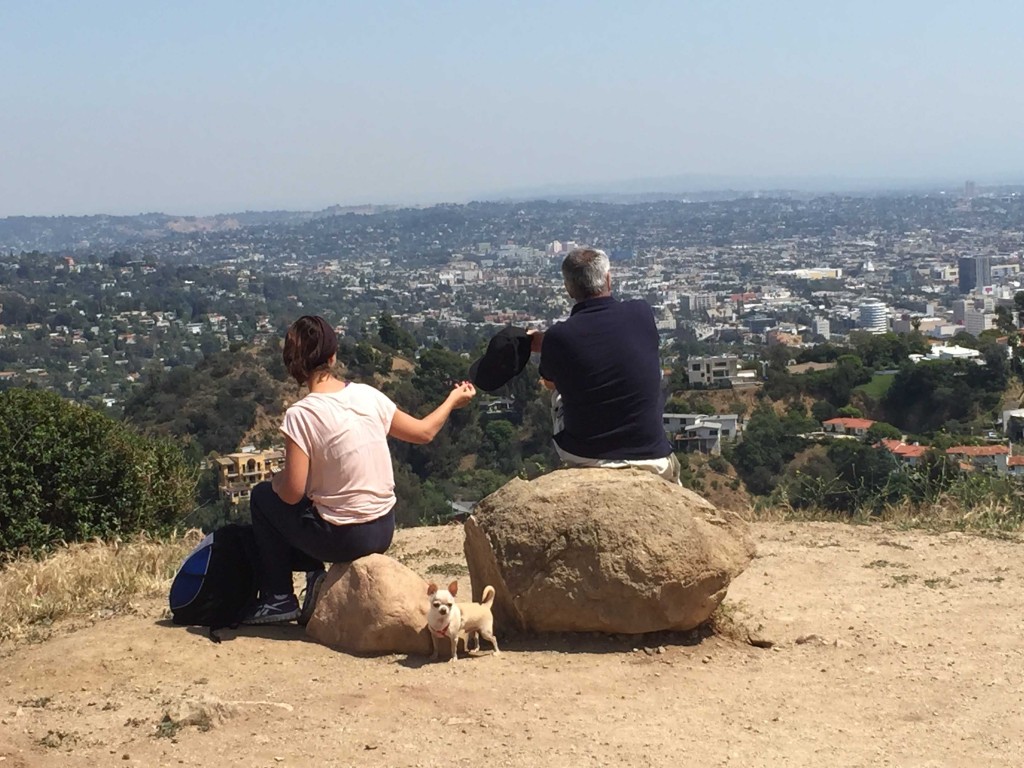 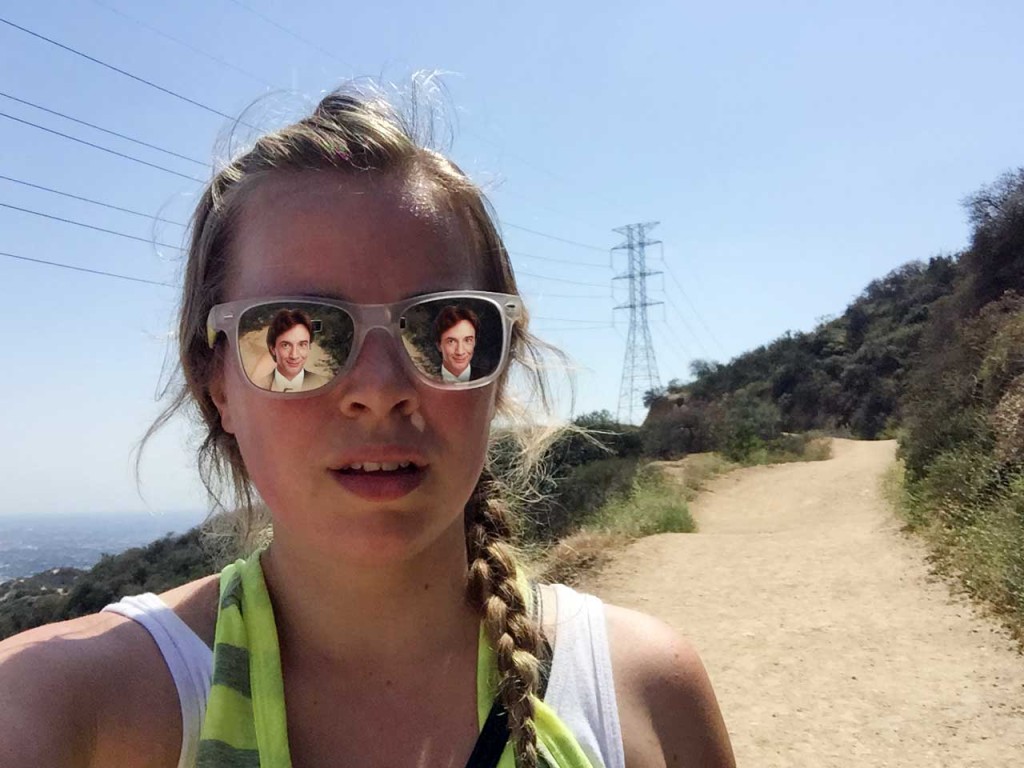 I took some photos of myself jumping in the air.

Here is a photo of me right before I jump.

I think it’s a funny photo because of my “pointer toes” body position and my face. 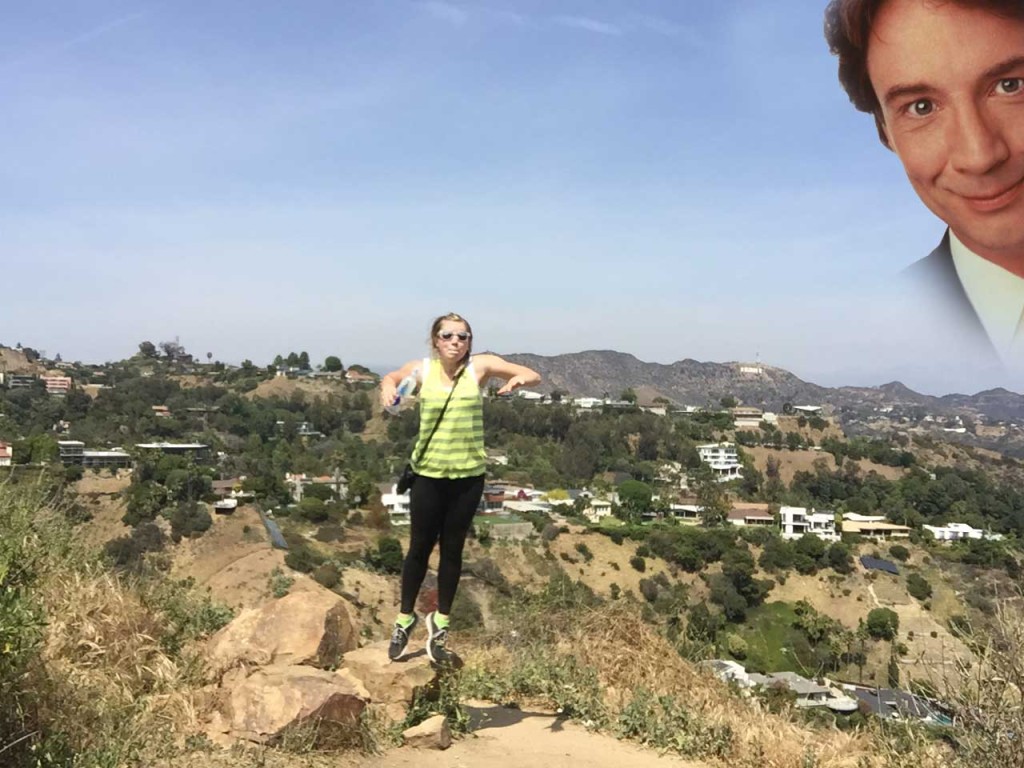 It felt great to walk downhill. 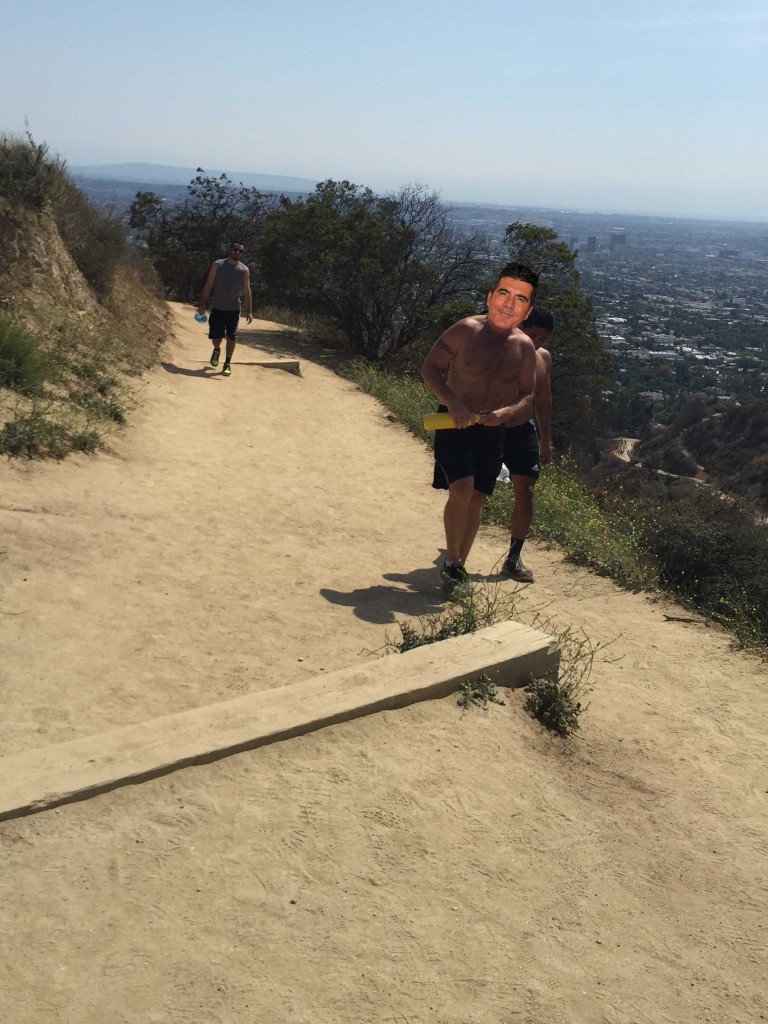 I was now on the other side of the mountain from where I started.

I saw the path I hiked. (outlined in green)

Without knowing, I took the steeper path.

A metaphor for life.

I walked down sandy stairs.

My sneakers slipped on a banana peel.

I caught myself before falling. 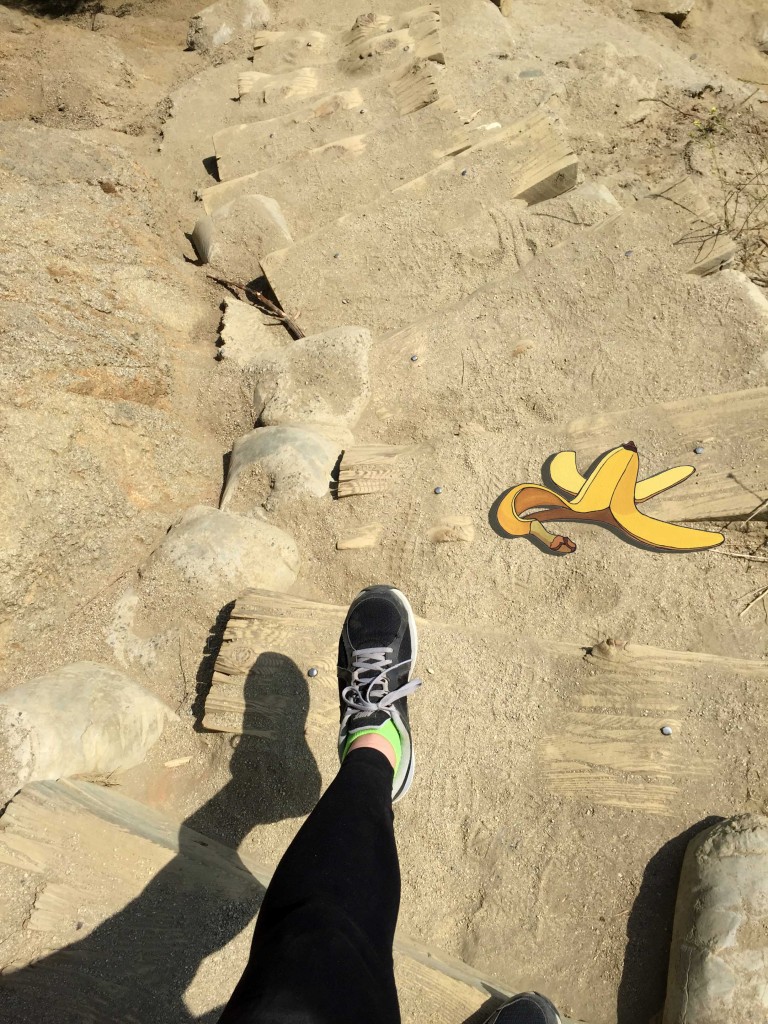 I got to the bottom of the mountain. 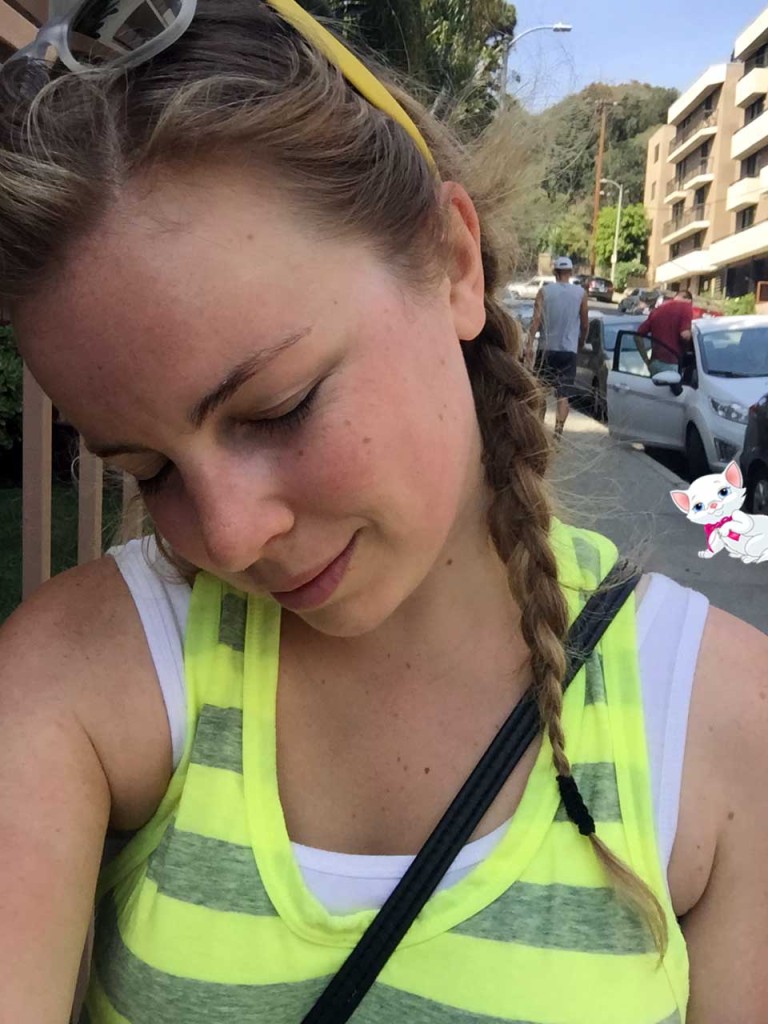 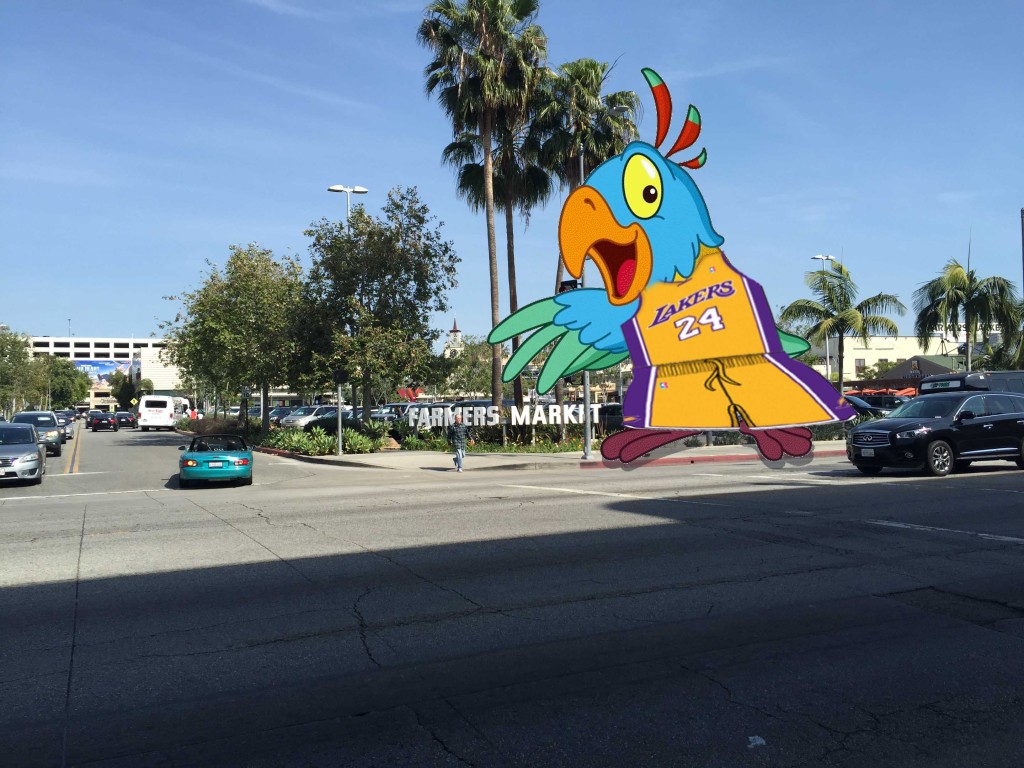